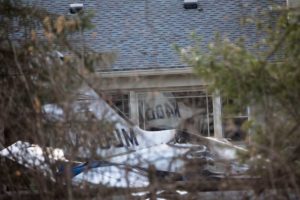 One man died after a twin-engine plane Piper PA-31-350 Navajo Chieftain crashed into a house in Madeira, Ohio. The aircraft, which had been gathering images for maps and geographic information systems (GIS), was heading back to Lunken Airport, but lost an attitude and fell on the ground, crashing in a residential house. The pilot on board died at the scene of the crash and the aircraft was completely damaged in the subsequent fire. There were no ground 3rd party injuries.

The officials identified the pilot as 62-year-old David Sapp.

“It was so strange to see a plane,” Waide said. “Felt sick cause you knew it was really bad. I said a quick prayer and tried to help but nothing (could) be done”, explained the Carter Waide, who lives behind the site of the wreckage.

Other neighbors described hearing a thud, but not a violent explosion, when the plane struck the home.

FAA investigators are on their way to the crash site, and the National Transportation Safety Board has been notified. The NTSB will be in charge of the investigation.

Piper PA-31 Navajo is a family of cabin-class, twin-engined aircraft designed and built by Piper Aircraft for the general aviation market, most using Lycoming engines. It was also license-built in a number of Latin American countries. Targeted at small-scale cargo and feeder liner operations and the corporate market, the aircraft was a success. It continues to prove a popular choice, but due to greatly decreased demand across the general aviation sector in the 1980s, production of the PA-31 ceased in 1984.