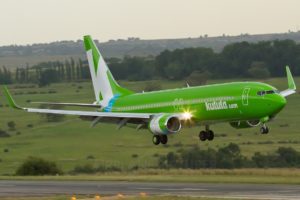 One passenger was injured during a flight of Kulula’s airplane Boeing 737-800 after severe turbulence occurred at the approach to Cape Town, South Africa. The cabin crew took immediate actions and helped the injured person. The aircraft Boeing 737-800 continued approaching and after 20 minutes safely landed on Cape Town’s Runway 01. There were no reported damages to the airplane and the hurt passenger was transported to local hospital fore medical treatment.

“About 20 minutes before landing in clear weather, the aircraft encountered severe turbulence, which caused injuries to a passenger”, said the official statement of Kulula.

The company will follow internal investigation for the accident.

The airplane Boeing 737-800 (registration ZS-ZWB) was performing flight from Johannesburg to Cape Town. The aircraft is part from Boeing Next Generation models, which is short- to medium-range, narrow-body jet airliners. Boeing 737-800 has maximum capacity for 175 passengers with range of operations 5,436 km. The aircraft has length of 39.47 m, wingspan of 35.79 m and wing area of 124.60 sq m.