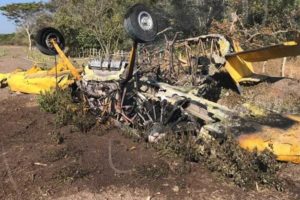 One person died after small plane Air Tractor 301-600 crashed into a tree in Mojarra, Nicaragua. The cropduster plane was fumigating in a plantation known as Papayita but due to unknown circumstances crashed into a tree and caught fire. The pilot died at the plane crash.

The Leon Police and Civil Aeronautics personnel arrived at the scene of the accident to determine the causes of the crash. The body of the pilot was removed from the wreck but was already dead. The investigation is underway.

Fortunately, during the accident, there were no injured people on the ground.

Air Tractor AT-300 is a family of agricultural aircraft that first flew in the United States on September 1973. Type certification was awarded to Air Tractor in November the same year, and serial production commenced in 1976. Of low-wing monoplane taildragger configuration, they carry a chemical hopper between the engine firewall and the cockpit. The aircraft has a length of 8.23 m, a height of 2.59 m, wingspan of 13.75 m and wing area of 25.08 sqm. The airplane’s empty weight is 1,723 kg, while gross weight is 3,492 kg.