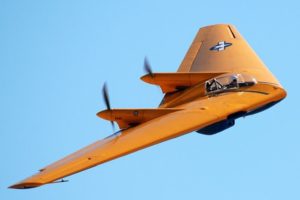 A historic Northrop N9M aircraft crashed on the grounds of a state prison in Norco and disintegrated in flames. The sole pilot on board died in the accident. There were no indications that prisoners or anyone on the ground were injured. Details and circumstances on the incident are still unclear.

A witness described the plane as “dipping” left and right before the fatal crash at the grounds of the California Rehabilitation Center just after noon Monday.

The Federal Aviation Administration and National Transportation Safety Board will investigate the crash.

The aircraft Northrop N9M was identified as a Flying Wing owned by the Planes of Fame Air Museum in nearby Chino. The museum’s website says the plane was built in 1944 and is considered a forerunner of the modern B-2 stealth bomber.

Northrop built four prototypes, but there was only one remaining, the museum said. The museum completed restoration of the aircraft in the 1990s and completed flight testing in 1996.

Northrop N-9M was an approximately one-third scale, 60-ft span all-wing aircraft used for the development of the full size, 172-ft wingspan Northrop XB-35 and YB-35 flying wing long-range, heavy bomber. First flown in 1942, the N-9M (M for Model) was the third in a lineage of all-wing Northrop aircraft designs.

Newer PostVietnam Airlines reported a profit of 64.5 million USD in Q1 2019
Older PostMore than a thousand turtles confiscated at the airport of Bogota in Colombia