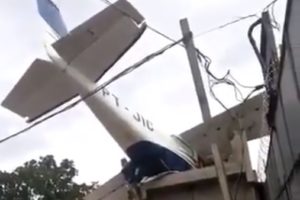 One person died and another two wounded after small aircraft Cessna 210L Centurion II crashed into a house in Belem, capital of the state of Para, is a port city and gateway to Brazil’s lower Amazon region. Two people from the aircraft were trapped into the wreck. The Para Military Fire Brigade responded immediately to the accident and succeeded to free the people from the aircraft. They found that another person on the ground was also injured.

The circumstances around the accident are not clear and the investigation is underway.