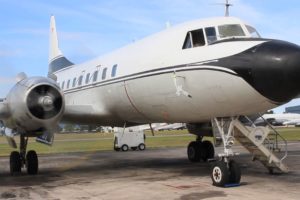 The Coast Guard conducted maritime and aerial searches for the missing pilot for approximately 21 hours and in an area of 364 square nautical miles. After nothing was found the SAR operation was suspended.

“Our thoughts remain with the family of Captain Robert Hopkins at this difficult time”, says the statement of Conquest Air Cargo. “This is a tremendous loss for our company; Captain Hopkins’ selfless leadership was and will always remain an example for us all”, adds the carrier.

The Convair C-131 Samaritan was an American twin-engined military transport produced from 1954 to 1956 by Convair. It was the military version of the Convair CV-240 family of airliners.