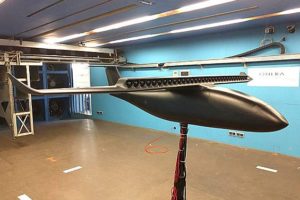 The French company Onera presented a model of its promising easy-to-manage and navigate fully electric aircraft Ampere. The aircraft model has already passed the first stage of purging tests in a wind tunnel. Compared with the first images of the new aircraft, the presented model has many differences.

The projects of electric aircraft today are very popular. One of the positive features of this airplane is a great freedom in the design. The fact is that electric motors can have any dimensions, and this removes some restrictions on their placement on the glider. In addition, the use of electric traction somewhat simplifies the design of aircraft. For example, the rejection of internal combustion engines (jet or piston) eliminates the need to design a fuel and oil system. Finally, electric planes and helicopters are considered to be ecologically safe.

The model presented by Onera has a classic airplane layout with a high wing and a T-tail. On the upper part of the wing on its leading edge are 32 small electric fans. According to the developers, this arrangement of the fans allows to increase the lift of the wing due to a significant acceleration of the air flow on its upper surface. In addition, separate control of the fans will allow better control of the airplane in the air.

According to the project, Ampere will be a six-seat aircraft with a flight range of about 500 km. The electricity on board the aircraft will comes from hydrogen fuel cells. They will be powered by on-board systems and electric motors, as well as charged batteries. The latter will cover the shortage of power in the take-off mode.

The French company expects that the commercial operation of the new electric aircraft will begin in the late 2020s. On the basis of Ampere, it is planned to develop an increased version of a passenger aircraft that will be able to transport from 50 to 80 passengers for a distance of up to 1,500 km.

The project for the Ampere electric aircraft was presented in October last year. Initially, it was planned to create a low-wing with a T-shaped tail unit and an elongated front horizontal plumage. On the right and left wing consoles on the upper surface on the front edge, it was planned to arrange 16-20 small electric fans.

At the same time it was stated that it would be easier to pilot the Ampere than an ordinary light aircraft, thanks to a special software. In addition, the navigation equipment is planned to be installed on the aircraft with a simplified graphic display.

It is expected that the Ampere will be quieter than conventional light aircraft. The fact is that small electric fans will produce more high-frequency noise than conventional aircraft engines. Such noise will quickly lose intensity at a distance. Small noise, in turn, will allow the use of Ampere on the runways in the city.