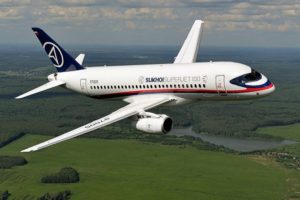 The tool assumes that 10 years after the sale of the aircraft, the buyer can return it to the manufacturer for 40% of the original cost. There will be another mechanism: the buyer resells the plane 10 years later and if the price turned out to be less than 40% of the initial one, then UAC-capital compensates the difference.

In 2015, 1.2 billion rubles have already been received for these purposes. And the delivery of the first six planes of the Irish airline CityJet (in 2016 ordered 16 airplanes) were leased with this mechanism. In 2017, the budget will allocate 676 million rubles for the program, 1.6 billion in 2018, and 2.4 billion in 2019, confirmed the representatives from the Ministry of Industry and Trade.

In total, the warranty program for Sukhoi Superjet 100 will be valid for 12 years. The new aircraft costs about 30 million USD, for the purchase of 100 airplanes at 40%, it may take 1.2 billion USD, or 70.8 billion rubles.

The interlocutors do not specify which airline will be supplied with the remaining aircraft with guarantees.

“Guarantees of sales support and other mechanisms that we are developing jointly with VEB, is planned to be used primarily for the export of aircraft”, said a spokesman for the UAC.

Sukhoi Superjet 100 is a modern fly-by-wire twin-engine regional jet with 8 (VIP) to 108 (all economy) passenger seats. With development initiated in 2000, the airliner was designed and spearheaded by Sukhoi, a division of the Russian civil aerospace company (UAC), in co-operation with several foreign partners. On 21 April 2011, the Superjet 100 undertook its first commercial passenger flight, on the Armavia route from Yerevan to Moscow.