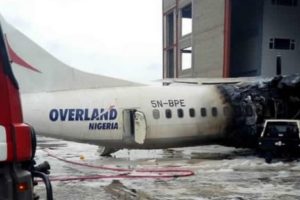 Overland Airways plane ATR 72-202 was substantially damaged after fire during maintenance at Lagos-Murtala Muhammed International Airport, Nigeria. The aircraft was powered by a ground power unit, but fire erupted in the electrical system, engulfing the front part of the aircraft. Fortunately, there were no casualties and serious injuries during the accident, as the fire was quickly contained by fire fighters from the Federal Airports Authority of Nigeria.

The regulatory authority has been notified of the incident. According to Overland Airways, the ATR 72-202 was impacted by a foreign object, which led to a fire that damaged aircraft. The right side of the fuselage was significantly damaged.