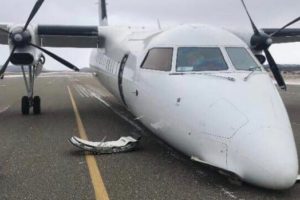 PAL Airlines plane de Havilland Canada DHC-8-300 landed with its nose touching the runway at Stephenville Airport in Canada. The aircraft was performing flight 1922 to Deer Lake in Newfoundland with 47 passengers and 4 crew on board, when the crew received indication of a potential nose landing gear issue. Given adverse weather in Deer Lake, the pilot decided to proceed to Stephenville for landing as the nose gear could not be confirmed as locked.

The front landing gear of the PAL Airlines plane de Havilland Canada DHC-8-300 failed to lock, causing the plane to land with its nose touching the runway. There were no injuries to passengers or crew.

Stephenville Airport rescue vehicles met the aircraft on landing. The passengers were transported to the terminal via ground vehicles.

The incident blocked the operations of Stephenville Airport and caused some changes to flight schedules, in addition to existing weather-related changes.