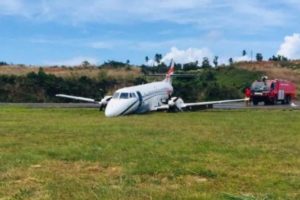 Sky High Aviation Services twin-engine aircraft BAe Jetstream 41 suffered a runway excursion after landing at Douglas-Charles Airport in the Dominican Republic. The circumstances around the aviation accident are unclear, but the weather in the vicinity was good and the runway was dry. Fortunately, there were no reported injuries among the passengers. All the people on board were evacuated and bussed to the terminal.

The aircraft which departed from Santo Domingo-Las Americas Jose Francisco Pena Gomez International Airport, Dominican Republic, suffered substantial damage as a result of the crash. The landing gears were damaged and the plane ended on the fuselage, which possibly suffered also constructional damages.

Photos from the scene show an undercarriage leg and debris on the runway with the aircraft having come to rest in the grass next to the runway.

British Aerospace Jetstream 41 is a turboprop-powered feederliner and regional airliner, designed by British Aerospace as a stretched version of the popular Jetstream 31. Intended to compete directly with 30-seat aircraft like the Embraer Brasilia, Dornier 328 and Saab 340, the new design eventually accommodated 29 passengers in a two-by-one arrangement like the Jetstream 31. Eastern Airways of the UK is the biggest operator of Jetstream 41s in the world, with 14 in the fleet.