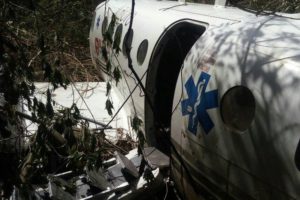 Air Majoro airplane Beechcraft 200C made emergency forced landing in a wooden area near Nuevo Saposoa, Peru. The aircraft with 12 passengers departed from Contamana en route to Pucallpa, but there was a technical problem and pilot decided to make a forced landing on the soft ground. The emergency call was made to the local authorities and at the scene were sent rescuers which assisted to all the people on board. All the passengers were alive and transported by helicopter to Pucallpa airport, where the ambulances will take them to the health centers in the area for medical checks.

“The aircraft, which carried 11 passengers, rushed after suffered an explosion and had to make a forced landing in that area”, head of the Ucayali Police Region, Cesar Flores Vergaray. “What we know so far is that this has not happened due to weather conditions”, added he.

Beechcraft Super King Air family is part of a line of twin-turboprop aircraft produced by Beechcraft. The Model 200 and Model 300 series were originally marketed as the “Super King Air” family, but the “Super” was dropped in 1996. They form the King Air line together with the King Air Model 90 and 100 series.