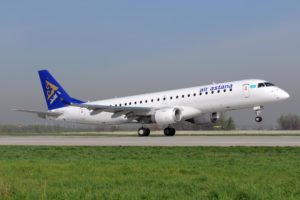 Passenger dies mid-flight on board of the Kazakhstan airline Air Astana. The aircraft was carrying a domestic flight from Shymkent to Astana, but shortly after takeoff returned to the airport, due to the deterioration of the passenger’s health. The cabin crew dealt with the matter in accordance with the protocol. The pilot diverted to the airport of Shymkent, where landed safely several minutes later.

“The airline staff carried out actions in accordance with the procedure of cardiopulmonary resuscitation on board.O n arrival, the doctors of the ambulance examined the patient and ascertained his death”, reported Kazakhstan airline Air Astana.

Air Astana is the principal airline and the flag carrier of the Republic of Kazakhstan, based in Almaty, Kazakhstan. It operates scheduled domestic and international services on 64 routes from its main hub, Almaty International Airport, and from its secondary hub, Astana International Airport. It is a joint venture between Kazakhstan’s sovereign wealth fund Samruk-Kazyna (51%), and BAE Systems PLC (49%).