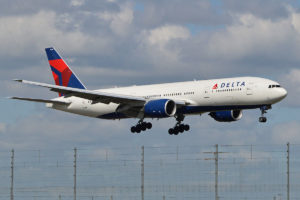 Passenger sued the American carrier Delta Airlines for being pricked with a needle left in a seat pocket. The incident occurred during a flight from Los Angeles to Atlanta in 2015. According to the passenger, Gabriel Ybarra, he reached into seat pocket to grab his wallet, and got stabbed by the needle. At that moment, the needle bit into his finger. When the man pulled it out, the wound began to bleed profusely.

After the incident, Gabriel Ybarra turned to the doctor. As a result, he had to take HIV tests within an year. In addition, doctors prescribed powerful medications to him to make sure he did not become infected.

According to the statement of claim, the drugs caused to the affected passenger dizziness, headache and aches in the body, as well as “explosive diarrhea”. In addition, according to the victim, he could not perform “his duties as a husband” for several months.

As there is no information on the results of HIV tests in the material, apparently they were negative.

Delta Air Lines is a major American airline, with its headquarters and largest hub at Hartsfield–Jackson Atlanta International Airport in Atlanta, Georgia. The airline along with its subsidiaries and regional affiliates operate over 5,400 flights daily and serve an extensive domestic and international network that includes 319 destinations in 54 countries on six continents