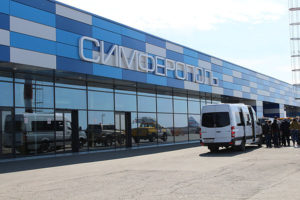 The top three airlines in terms of passenger traffic in 2018 are Aeroflot, Russia, and Ural Airlines. Together, they carried 2.077 million passengers. Over the past 12 months, Ural Airlines became the leader of traffic, which carried 1.053 million people on its flights.

“Crimea is a popular holiday destination not only during the summer season. The mild climate traditionally attracts tourists during the New Year holidays. Thus, from December 29, 2018, to January 9, 2018, Simferopol Airport served 101,457 passengers. On December 30, when was the record for the daily passenger traffic on New Year’s holidays, the airport served totally 10,488 people. During the New Year’s holidays, from the end of December 2018 to mid-January 2019, additional flights were opened from Simferopol Airport to Moscow, Kazan, St Petersburg, and Samara”, says the official statement of Simferopol Airport.

Simferopol International Airport is an airport in Simferopol, which is the capital of the Republic of Crimea. Built in 1936, the airport today has one international terminal and one domestic terminal.