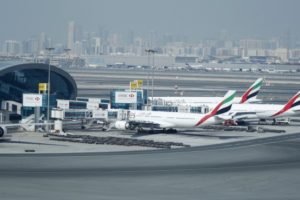 Dubai International Airport, which is the transfer point of European and Asian air routes, has strengthened its position as a world leader in the volume of international travelers in 2017. Last year, 88.2 million passengers crossed the Dubai International Airport (DXB) terminals, compared with 83.6 million in the previous year. This is an increase of 5.5% and is an improved record for the fourth consecutive year. The record has been reached despite the temporary US laptop ban and sanctions of US authorities to several Muslim countries.

Emirates Airlines has transported 59 million passengers last year to more than 191,000 flights, but has also expanded its network to 156 destinations and made a partnership with low-cost Flydubai. The airline has received 21 new aircraft with which its fleet already has 269 aircraft.

Dubai holds the record of international passenger traffic since 2014, when it took the crown from Heathrow in London. But ambitions do not stop here. Dubai Airports, which is responsible for two airports in the Emirates – Dubai International and Al Maktoum, announced at the end of 2015 that it will turn Dubai into a leading international hub in domestic and international traffic.

This challenge is to overtake rivals Atlanta and Beijing, which, according to the International Airport Council, have accepted 104 million and 94 million passengers respectively in 2016.

The growth of Dubai airport traffic is expected to continue. Paul Griffiths, Dubai Airport General Manager, said on Monday he is aiming to reach 90.3 million passengers at Dubai International Airport this year. According to him, planned construction projects within the 32 billion USD investment program announced in 2015 will allow Dubai International Airport capacity to be gradually increased to 118 million passengers per year.