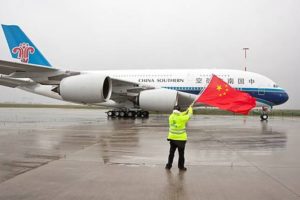 The volume of passenger flights in China during the weekly holidays from February 4 to 10 for the Lunar New Year’s celebration rose by 10.6% YoY to 12.586 million people. The number of flights increased by 6% to about 111,000.

During the first two days, the airports of Lijiang, Urumqi, Tianjin, and Shanghai were the leaders in workload. From February 8 to February 10, the workload of flights in the cities of Xishuangbanna, Beihai, Sanya, Haikou, and Harbin exceeded 95%.

On the last day of the holiday, passenger traffic reached 2.026 million people, which was a historical record.

From January 21 to February 10 (for 21 days, Chunyun, or the so-called mass New Year migration of the population before, during and after the Lunar New Year), passenger air transportation increased by 10.4% and reached 37.462 million people.

Air travel is becoming increasingly popular in China due to the expansion of the route network and the increase in incomes of the population.

On February 4-10, the country’s largest carrier, China Southern Airlines, transported more than 2.1 million passengers, about 7 million during Chunyun. This is about 8% higher than last year.