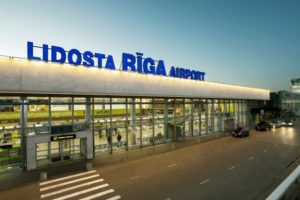 According to the results of July this year, the passenger flow of the airport was 0.646 million people, which represents an increase of 16.2% yoy. The volume of transportation of goods and mail increased by 57.7%, to 2,350 tons. The number of completed flights reached 7,050, which is 15.8% more than an year ago.

Riga International Airport is the base for five Latvian airlines: airBaltic, Raf-Avia, LatCharter, Inversija, Vip Avia, but also is one of the base hubs for Wizz Air. The largest airline of the airport is airBaltic. Passenger traffic in 2016 amounted to 5.4 million people, the volume of transportation of goods and mail amounted to 19,800 tons.

Riga International Airport is located in the capital of Latvia, and is the largest airport in the Baltic states with direct flights to over 90 destinations in 30 countries. The airport is located in the Mārupe municipality on 10.0 km from Riga and is a state-owned joint-stock company, with the owner of all shares being the government of Latvia. The holder of the state capital share is Latvia’s Ministry of Transport.