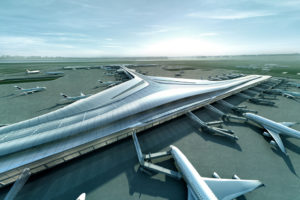 The Shanghai Pudong International Airport for the fifteenth consecutive year has taken the leading position in China on the total volume of passenger traffic on international routes, which in 2017 broke the historic maximum and exceeded 35 million people.

Every day the main airport of the metropolis serves about 98,000 passengers of international flights. In the outgoing year, about 60% of this passenger traffic – 22.4 million people – was made by the citizens of the PRC. Among the most popular international destinations are the Republic of Korea, Japan, the countries of Southeast Asia, Hong Kong, Macao and Taiwan. Also during the year noticeably increased the number of foreign nationals who issue a 24-hour permit to the right is in Shanghai without a visa. According to official data, more than 400,000 foreigners used this service directly at Pudong airport.

The airport is constantly improving its technical equipment and optimizing the service sector. So, in the current year, 67 new automatic turnstiles have started operating at the airport, allowing them to pass customs control in just ten seconds. They can be used by all Chinese citizens, as well as foreigners who have a residence permit in China or a visa with a validity of at least six months.

An innovation in the past year for the two Shanghai airports Hongqiao and Pudong was the introduction of the QR code system instead of the traditional boarding pass when registering for the flight and passing the security check. The passengers departing only with hand luggage can now go directly to the security check before boarding without having to print out boarding passes, having an identity document with them, as well as a special QR code on the mobile phone provided by the airline. The new system allows significantly speeding up the registration process for the flight. Travelers with luggage or children, passengers, however, still have to register at the airline gate.

Shanghai is one of the five largest transport hubs in the world with a total annual passenger flow of over 100 million people in two local airports – Pudong and Hongqiao. They consist of four terminals and six runways. In 2015, these airports accounted for up to 11% of total China’s air traffic. From Pudong, serving mainly international destinations, planes fly to more than 250 cities around the world.

At Pudong International Airport, two new terminals are currently being built, which will be connected to the two underground terminals that are currently operating underground. The project will be completed by 2019. Two airports in Shanghai by 2020 will be able to serve about 120 million passengers and 5.2 million tons of cargo annually.