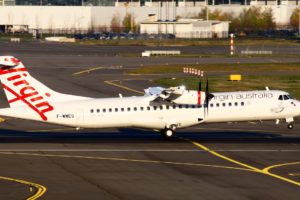 The passengers were evacuated from a Virgin Australia airplane ATR 72-600 after a note for bomb was found in the toilet of the aircraft. The airplane was just landed after a flight from Sydney to Albury, when the stewards urged the people to abandon the plane due to signal for bomb threat. The doors of the plane were “ripped off” from the outside by authorities and passengers were told to leave their luggage and jump about 1.20 m from the front exit onto the tarmac.

“Albury police received information that a note was located on an item in the toilets of an aircraft en route to Albury”, said a Police officer. “Nothing was found, there was no threat to anyone, just a note”, added he.

Later, a man who was a passenger on the 68-seater airplane ATR 72-600 was arrested on the tarmac and taken away by police. He was later charged with send document threatening death or grievous bodily harm and give false information person/property in danger.

Eyewitnesses heard someone to say: “Leave the luggage. Leave and run, run, run”. According to witnesses of emergency, passengers jumped on the runway.

There were no injured people during the accident.

Earlier it was reported that in the Melbourne area of ​​Brighton there was an explosion and shooting, after which the unknown person took a woman hostage. In the hall of the building, a man was shot and killed. During the special operation, the criminal was killed and the hostage was released. In the police, the incident was called a “terrorist incident”, the responsibility was assumed by the group “Islamic State”.