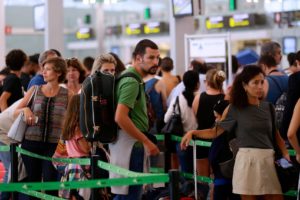 All the passengers of incoming flights to the United States will be subject of additional security screening procedures and checks before takeoff. All the airports face the threat of chaos as airlines implement extra security checks, including both American citizens and foreign travellers, before they board aircraft.

From today all US-bound flights are forced to comply with the new security measures and additional security screening procedures, demanded by Washington following the scrapping of the laptop ban.

Both American air carriers and global airlines must comply with the new rules, affecting all the 2,100 US-bound flights every day. The measures will affect 325,000 airline passengers on 180 airlines from 280 airports in 105 countries.

“The security measures affect all individuals, international passengers and US citizens, travelling to the United States from a last point of departure international location”, said the spokeswoman for the US Transportation Security Administration, Lisa Farbstein. “These new measures will impact all flights from airports that serve as last points of departure locations to the United States”, added she.