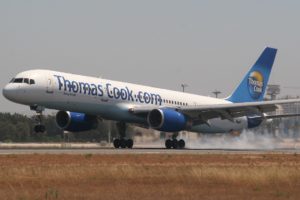 Passengers of Thomas Cook aircraft Boeing 757-300 were evacuated on the runway of Hurghada Airport in Egypt after detecting smoke in the cabin. The aircraft was about to depart from the airport to London Gatwick, but smoke appeared in the cabin, which prompted the flight crew to initiate an evacuation of the 251 passengers via slides onto the runway and then transported back to the terminal. Later the replacement aircraft is estimated to depart during the day.

Several passengers received injuries during the evacuation process, including one fracture and some minor ones. They were medical treated and again boarded on the replacement plane.

The local authorities initiated investigation of the accident. The sources report that smoke appeared below a passenger’s seat prior to departure causing panic among the passengers prompting the crew to initiate an emergency evacuation.

The cause of the smoke was identified to be a technical malfunction, the aircraft was examined and returned to service. However, the airline Thomas Cook decided to dispatch a replacement aircraft to make the flight from Hurghada to London Gatwick.

Boeing 757 is a mid-size, narrow-body twin-engine jet airliner. It is the manufacturer’s largest single-aisle passenger aircraft. The twinjet has a two-crew member glass cockpit, turbofan engines of sufficient power to allow takeoffs from relatively short runways and higher altitudes, a conventional tail and, for reduced aerodynamic drag, a supercritical wing design.