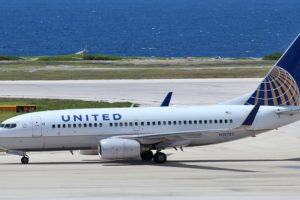 Passengers of the US airline United Airlines neutralized the offender on board of an airplane during a flight from Houston (Texas) to New Orleans (Louisiana). The accident occurred half an hour after take-off of the Boeing 737-700, when a women suddenly started screaming and pounding on the wall of the plane’s cabin. After that, she jumped up from her seat and ran towards the cockpit of the pilots.

The flight attendants were unable to stop her, but five men of the passengers assisted and the woman was neutralized. According to eyewitnesses, the woman was insane and very aggressive. As a result, she had to be bound hand and foot.

The liner, carrying about 100 passengers, returned to Houston airport. The traveler was transferred to the police. After that the aircraft resumed the slight to New Orleans.

The airline thanked their customers for their patience, and the crew for their professional actions.

Boeing 737 is a short- to medium-range twinjet narrow-body airliner. Originally developed as a shorter, lower-cost twin-engine airliner, the 737 has developed into a family of ten passenger models with capacities from 85 to 215 passengers. The 737 is Boeing’s only narrow-body airliner in production, with the 737 Next Generation (-700, -800, and -900ER) and the re-engined and redesigned 737 MAX variants currently being built.