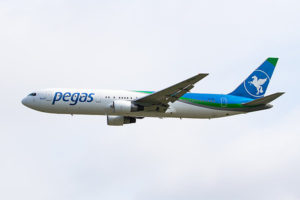 The airline Pegas Fly transported a millionth passenger in 2017. This significant result was achieved with the use of an efficient system for operating its own fleet, which consists of 8 aircrafts: 6 of which are Boeing 767-300 in a two-class configuration, as well as 2 Boeing 737-800 in a single-class configuration.

“The airline’s route network within Russia encompasses socially oriented directions. Participating in subsidized transport programs, the airline provides an increase in the availability of transportation in such important areas as the Far East and the Republic of Crimea. The airline Pegas Fly was one of the first to start regular transport to Simferopol from the regional cities of Russia”, notes the airline in statement.

On the background of growing demand for the most popular tourist destinations and in order to further expand the route network, Pegas Fly announced a strategic partnership with Zhukovsky International Airport. Due to the receipt of permits for international air transportation of passengers both to the CIS countries and to the foreign destination, the airline opened regular flights to Baku and Xian, but also a charter program was carried out to Turkey and Tunisia.

Pegas Fly, previously named Ikar, is a Russian airline headquartered in Krasnoyarsk and based at Yemelyanovo International Airport.