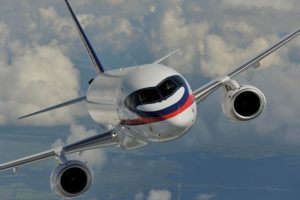 The Persian Gulf countries are showing interest in the possible purchase of Russian aircraft SSJ 100. At the Bahrain international airshow (BIAS-2018) the liner was specially presented in a two-class layout. This was told the president of the company Sukhoi Civil Aircraft (GSS), Alexander Rubtsov, reports TASS.

“We met on the fields of the air show with the Minister of Transport of Saudi Arabia, the Deputy Minister of Transport of Bahrain, there were consultations with Saudi, Bahraini and other airlines of the region”, said the President of the Sukhoi Civil Aircraft, Alexander Rubtsov. “Today we signed an agreement with Alexcina LLC on 12 aircraft [about intentions to purchase aircraft]”, added he. “There was a corresponding agreement with local airlines for SSJ 100 in a two-class layout. Before that, we flew airplanes either in the VIP version or in an economic version. We see interest”, added he.

According to him, the region has very specific operating conditions: heat, sand, humidity combined with the sea, which contributes to corrosion. “Here it is necessary to prepare the machines for operation very seriously”, said Alexander Rubtsov.

The SSJ 100 is the first civil aircraft developed in Russia. It belongs to the family of regional vessels, the range of the basic version is 4,400 km, the capacity is 98 passengers. Its use began in 2011. Abroad, the SSJ 100 is operated in Belgium, Ireland, Mexico, and the largest operator in Russia is Aeroflot.