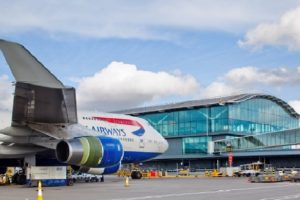 Mohamed became a carrier in the First Class area of ​​Terminal 3 in early February. The former criminal worked for five days at the largest British airport. For this time, he was able to shoot a close-range aircraft and publish the pictures on social networks that could be judged to have had access to the take-off runway.

At the end of the week, the airport announced that their new employee was on a list of suspected terrorists. He has 17 nicknames and rich list of charges of robbery, money laundering, threat of murder and violence. The 31-year-old Mohammad has been in prison for 5 years.

The Security Office explained that the investigation took some time, so they did not immediately know who they were dealing with.

From the airport, Mohamed Abdullah Mohammad had a temporary pass. He was carefully searched at the entrance, and when he had to enter a zone of increased control, he was always accompanied by a security officer, so there was no formal breach of the law.

Heathrow is considered the second largest airport in the world, and first in Europe. It has five passenger terminals and one freight and annually serves 67 million passengers.