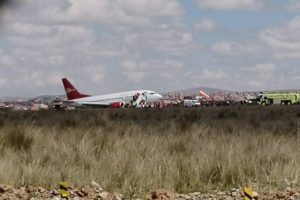 Peruvian Airlines Boeing 737-500 landed with collapsed gear at La Paz-El Alto Airport in Bolivia. The flight P9-331 had departed from Lima, Peru en route to La Paz, Bolivia, with a scheduled stop at Cuzco, Peru. The aircraft landed on runway 10 at La Paz-El Alto Airport, but the main landing gear collapsed. It came to rest on the runway with the nose landing gear and both engines contacting the ground.

Peruvian Airlines Boeing 737-500 came to a stop on the center line of the runway resting on nose gear, both engines and the aft belly of the fuselage. The aircraft sustained substantial damage.

The passengers disembarked onto the runway via mobile stairs without reporting injuries.

The airport was closed during the incident, but after several hours the operations were restored.

The Boeing 737 is a short- to medium-range twinjet narrow-body airliner developed and manufactured by Boeing Commercial Airplanes in the United States. The Boeing 737 Classic is the name given to the -300/-400/-500 series. The Classic series was originally introduced as the ‘new generation’ of the 737. Produced from 1984 to 2000, 1,988 aircraft were delivered.