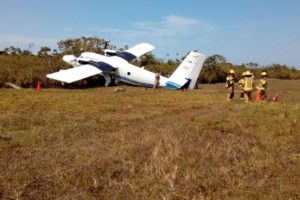 Peruvian navy aircraft Viking DHC-6 Twin Otter 400 crashed during landing at the runway of the international airport in Iquitos at Loreto region in Peru. The airplane left the air base No 42 – sector of Moronacocha, to make a flight of training flight, but suffered mechanical failure and interned to land on Iquitos Airport. The control tower of the terminal was informed for the emergency landing and at the scene were prepared General Corps of Volunteer Firefighters and the Peruvian National Police.

The pilot landed the airplane, leaving the runway when he intended to go to the FAP Santa Clara air base, which is located on the side of the airport. The plane was shattered in the front, but the FAP officers, left unharmed, despite of the significant damages to the aircraft.