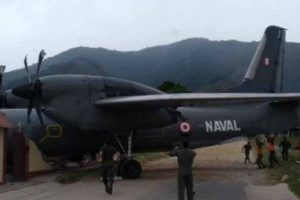 Aircraft Antonov An-32, operated by the Peruvian Navy, crashed into the building of the police station at the Mazamari military base in Satipo. According to the publication, the aircraft suffered a runway excursion during landing and overran it, crossing the road and impacted a building. The nose of the aircraft Antonov An-32 sustained substantial damage and one of the propeller was damaged. On board of the aircraft there were 70 soldiers, but fortunately there were no reported injuries and casualties.

The aircraft carried out a logistic flight at the disposal of the Vraem Special Command with 70 agents of the National Police.

The local authorities initiated investigation for the root cause of the accident and it is noted that the runway excursion was due to the failure of brakes.

Antonov An-32 is a twin-engined turboprop military transport aircraft. The high placement of the engine nacelles above the wing allowed for larger diameter propellers, which are driven by 5,100 hp rated Ivchenko AI-20 turboprop engines.