Ethan Chappel, a fan of space photography in the United States, never imagined that he would witness a unique event; in regard to astronomical phenomena.

Capture the exact moment when a meteor collides directly with Jupiter on video.

Taking advantage of the good weather and that the planet is in position; He decided to go out at night to photograph the stars; His surprise was maximum when he caught a flash in the southern part of the planet.

He then shared the video on the internet and with experts in the field.

After the analysis, astronomers pointed out that it was a racing car, a meteorite that travels at high speed and explodes when it comes into contact with the atmosphere of a planet; pointing out that although they are events that occur repeatedly, although they are rarely captured. 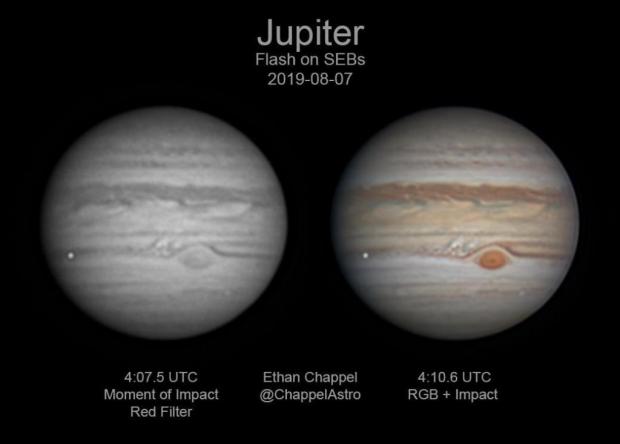 Regarding this shock, the reasons for its nature were given, which are linked to the same structure of Jupiter.

As we mentioned, that a meteorite comes into contact with the atmosphere of a planet is something to some extent common; Earth is constantly bombed, although these pieces disintegrate.

In the case of the gas giant, given its size and gravitational power; It is a more appropriate objective for this type of event; In fact, it could attract space objects larger than our planet.

It is believed that the meteorite of the video had large dimensions by the clear flash.

In the case of the Earth, the opposite happens, the smaller the meteor, the easier it could impact; likewise, if it is of considerable dimensions, it is difficult to find a collision route, unless an external force intervenes.

However, investigators do not lower their guard before the so-called “global killers“; Hence, in recent times they allocate resources to defense and contingency systems in the event of such an event.

Newer PostThree Arrested for Leaving with 600 Kilos of Cocaine on a Private Jet from Carrasco, Uruguay
Older PostA Southwest Pilot Brings Back the Remains of his Father from Vietnam in 1967