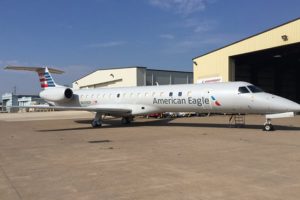 Piedmont aircraft Embraer ERJ-145 suffered problems with the cabin pressure during climbing out of Harrisburg, Pennsylvania. The aircraft was performing flight to Charlotte, North Carolina on behalf of American Airlines. The pilot descended the aircraft to 10,000 feet and diverted to Washington Dulles, where landed safely about 50 minutes after departure. Following the accident three people were taken to hospital with ear pain and bleeding.

Passengers reported that ground personnel needed to “wrestle” the door open after landing. A sudden wind rush occurred when the door finally opened. Many passengers were screaming in pain, some complained from complete loss of hearing.

Investigation for the root cause of the accident is under way.

The Embraer ERJ family is a series of twin-engine regional jets produced by Embraer, a Brazilian aerospace company. Aircraft in the series include the ERJ135 (37 passengers), ERJ140 (44 passengers), and ERJ145 (50 passengers), as well as the Legacy business jet and the R-99 family of military aircraft. Each jet in the series is powered by two turbofan engines.