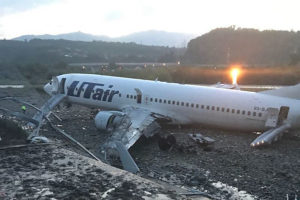 The International Aviation Committee (IAC) issued a preliminary report on the investigation of the accident of the Utair’s Boeing 737, which occurred on September 1, 2018 at the Sochi International Airport.

Utair’s aircraft Boeing 737 suffered runway excursion after landing at Adler Airport. After leaving the runway, the airliner broke through the airport fence, slid into the Mzymta River and caught fire. During the accident on board of the aircraft were 164 people and six crew members. Of these, 18 passengers were injured. There were no casualties during the accident.

According to the IAC interim report, the pilots of the Boeing 737 approaching the Sochi International Airport repeatedly ignored warnings about dangerous weather events. So, at 23:42:55 the dispatcher allowed the crew to land. At 23:43:15 the crew released the mechanization into the landing position. At an altitude of about 340 m and a distance of 6,500 m from the end of the runway was heard “Pay attention to the radar screen”. Despite this warning, the local authorities decided to go ahead and continued the further descent. According to the IAC, in accordance with FCOM, when passing this speech information, the crew must perform either a windshear Escape Maneuver or a standard go-around.

Already at an altitude of about 30 m, the FAC took over, turned off the autopilot and proceeded to perform the standard (with the cleaning of the flaps and the chassis) go-around. According to the crew’s explanation, the missed approach was performed due to falling into heavy rainfall, which significantly impairs visibility on the runway.

At 11:56:42 at an altitude of about 140 m and at a distance of 2650 m to the end of the runway, the acoustic alarm sounded: “Windshear, Windshear, Windshear”. The crew continued to decline. At an altitude of about 25 m, the crew turned off the autopilot and automatic thrust. After turning off the autopilot, there was a further increase in instrumental speed and a decrease in vertical speed. The aircraft landed at a distance of about 1,300 m behind the entrance end of runway 06 at an instrument speed of about 300 km/h. Ground speed was about 315 km/h, clarified in the MAC.

After the aircraft landed in automatic mode, spoilers were released and automatic braking began. However, in fact, the reverse of the engines was switched on only 20.5 seconds after the aircraft landed, at a distance of 2,685 m from the runway inlet. Due to the fact that the engine speed during the run on the runway went to the terrestrial small gas, the pickup time increased significantly, and the speed reached the design mode after the aircraft was rolled out of the runway limits. About 26 seconds after touching the runway, the plane rolled out of its borders, broke through the fence of the airfield and stopped in the riverbed of the Mzymta River, after which the left engine caught fire.

The crew carried out an emergency evacuation of passengers. After the announcement of the alarm and the arrival of the ASC, the fire was extinguished. As a result of the accident, several people sought medical help. Sun received significant damage. There are no victims and destructions on earth.