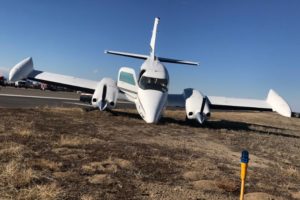 The aircraft Piper PA-24 Comanche experienced a gear-up landing at Centennial Airport in Denver, Colorado. Two people on board of the airplane were not injured and no subsequent fire was reported. South Metro Fire Rescue responded to the scene and assisted the people from the aircraft and closed the runway until cleaning the wreckage. The aircraft suffered sufficient damages during the crash.

Fortunately, both people on board were alive and without serious wounds. The root cause of the accident is unclear, but according to the preliminary information, there was a crosswind at the time of landing, which caused the gear-up.

The investigation is underway.

Piper PA-24 Comanche is an American four-seat or six-seat, low-wing, all-metal, light aircraft of semi-monocoque construction with tricycle retractable landing gear. Piper Aircraft designed and developed the Comanche, which first flew on May 24, 1956. Together with the PA-30 and PA-39 Twin Comanche, it made up the core of the Piper Aircraft lineup until 1972, when the production lines for both aircraft were wiped out in a flood.