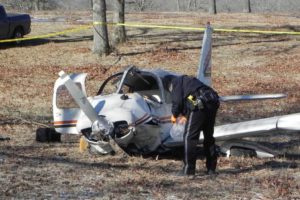 Aircraft Piper PA-28-180 Cherokee B impacted trees and terrain in Texas County near Summersville, Missouri. The sole pilot, who was identified as a lawyer from Springfield, was killed, while the aircraft sustained substantial damage. The crash happened on private land, about 1-2 miles north of Summersville, on several meters from Highway 17.

Witnesses of the accident saw the aircraft losing an attitude and crashing into a tree. The local authorities were informed about the accident and sent emergency teams at the scene, but unfortunately, the pilot had been received fatal injuries.

The NTSB and FAA are on their way to this crash scene to investigate what caused this plane to crash.

Texas County Sheriff Scott Lindsey says the pilot, 64-year-old Robert Torp, was found dead inside the plane. He says Torp is not the plane’s registered owner.

The Piper PA-28 Cherokee is a family of two- or four-seat light aircraft built by Piper Aircraft and designed for flight training, air taxi and personal use. The PA-28 family of aircraft comprises all-metal, unpressurized, single-engined, piston-powered airplanes with low-mounted wings and tricycle landing gear. They have a single door on the copilot side, which is entered by stepping on the wing.