The Mexican military retained a plane loaded with 450 kilos of cocaine, valued at 5.6 million dollars.

The aircraft was in Chiapas and it is presumed that it transported coca from South America (Colombia or Ecuador).

The C-206 aircraft with registration N771SP was detected entering the Mexican airspace, so they deployed: a detection plane, two interceptors and a UH-60 helicopter with Mexican Army personnel, who managed to locate it already landed in southern Chiapas. It happened on Monday.
According to the data provided by the Army itself, when the helicopter arrived with personnel from the Mexican Army and Air Force to the landing site, they secured, in addition to the aircraft, 18 packages containing cocaine, making a total of approximately 450 kilograms. 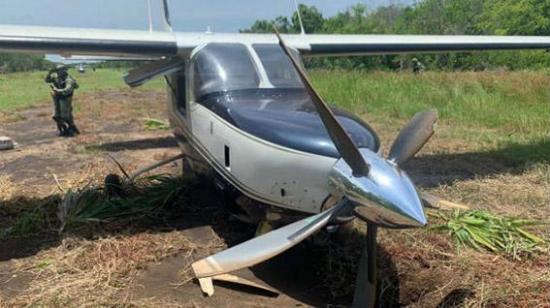 The seized drug has an approximate market price of $5,625,000, which significantly affects criminal organizations.
Just last week, members of the Secretariat of the Navy (Semar) seized almost two tons of drugs that were in a seemingly abandoned ship near Puerto Libertad, in Sonora. Another case.A few days ago in Cancun, another plane was seized with cocaine.

They were 200 kilos that are estimated to cost 3 million dollars. The Comprehensive Air Surveillance System monitored the entry and descent of an illegal aircraft in Mexican territory.
Army troops moved to the vicinity of the Río Verde settlement in the Quintana Roo municipality of Othón P. Blanco. There they located a King Air 300 brand aircraft registered N-256NM, without registration in the database of the General Directorate of Civil Aviation.
Near the place where the drug was seized, a tractor, a pick-up truck, two long weapons, four short, four loaders and 300 cartridges of different calibers were seized. Land surveys began and in the town of El Gallito they found, hidden among the weeds, nine sacks containing 20 packages of various sizes with 200 kilos of cocaine.
Source: Eldiario

Newer PostSouthern Winds: The Airline that was a Boom and Ended in Scandal
Older PostMan Survives Plane Crash in Quebec Wilderness and Recorded Everything