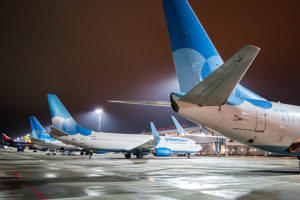 Thus, Pobeda Airlines will lease “no more than 15 aircraft of the Boeing 737 MAX 8 with LEAP1B27 engines” from the Irish SMBC Aviation Capital. The cost of the contract will be up to 1.125 billion USD. The estimated lease term for the aircraft is 10 years, deliveries are planned from November 2019 to November 2021. The agreement also has the option for changing 7 Boeing 737 MAX 8s into more spacious Boeing MAX 200s.

Another “no more than five” Boeing 737 MAX 8 aircraft will be acquired in 9-year lease from the Irish-American GE Capital Aviation Services, according to the procurement documentation. Their delivery is expected during the first half of 2020. The cost of the contract is estimated at 375 million USD.

Both leasing companies were selected by Pobeda Airlines on the basis of purchases from a single supplier.

The Boeing 737 MAX is the fourth generation of the medium-haul Boeing 737 aircraft, designed to replace the Boeing 737 Next Generation family. In the fleet of Pobeda Airlines are operating 22 Boeing 737-800 NG, designed for 189 passengers. By 2020, under existing contracts, the company will receive eight more of these machines. At the end of last year, Andrey Kalmykov, the general director of Pobeda, stated that the company was in talks on new supplies, including the Boeing 737 MAX. In July, with reference to the state procurement website, it was reported that the carrier is looking for a consultant to agree on a sale-leaseback transaction for 30 such aircraft.