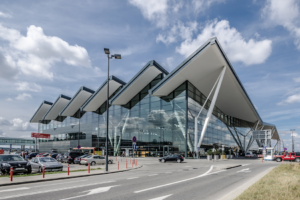 Poland builds a new international airport due to the growing traffic. It will be built 40 km west of Warsaw, in the municipality of Baranow in Central Poland at a territory of about 3,000 hectares. The estimated launch is 2027, the carrying capacity will be 45 million passengers per year, which in the future should increase to 100 million. It is expected that the construction of the facility will cost 7.2-8.4 billion EUR, taking into account the transport infrastructure.

The new Polish airport should become one of the largest transfer hubs in Europe.

“Our country is located at the intersection of routes between major metropolitan areas, such as Los Angeles-Tel Aviv, Vienna-Tokyo, Shanghai-Paris and New York-Tehran”, states the government resolution adopted in November 2017.

Some have already said that the new airport will become a burden for the state budget.

“In my opinion, the existing cost estimates are understated, the real cost will be higher”, says Jacek Krawczyk, the president of the employers’ group at the European Social and Economic Committee. “Moreover, it’s not just about financing the construction, but also about making the new transport hub profitable in the future”, added he.

The project may also damage regional airports, which have shown growth since Poland joined the EU in 2004. “The idea of ​​a central airport contradicts the decentralized model of aviation successfully developed in the country”, added Jacek Krawczyk.

A special law on the preparation and construction of a new airport will be adopted in Poland this spring.

In 2017, the Warsaw Airport Frederic Chopin received about 16 million passengers and air traffic in it is considered the busiest in Central and Eastern Europe. Last year, the hub overtook Prague Airport Vaclav Havel (15.4 million) by the number of passengers served.