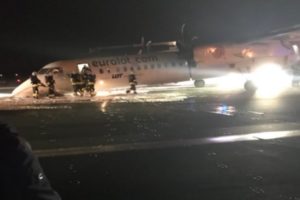 Aircraft Bombardier Dash 8 Q400 of Polish airline LOT made an emergency stop on the runway after landing gear failure at Warsaw Airport Frederick Chopin. The airplane was making a flight from Krakow to Warsaw with 59 passengers and 4 crew, but during landing the nose gear did not properly lock and the airplane has landed on its hull. Fortunately there were no seriously injured people during the accident.

The aircraft Bombardier Dash 8 Q400 stopped on the runway and closed the Warsaw Airport. The emergency teams arrived immediately at the scene of the accident and evacuated all the people.

The operations on the airport was suspended and local authorities initiated investigation for the root cause. Currently all flights towards Warsaw airport are diverting to nearby airports.

Bombardier’s 70 seat de Havilland Dash 8 Series Q400 (or Q400 for short) is the latest and longest member of the successful Dash 8 family, but with new engines, avionics and systems, a modified wing and stretched fuselage is essentially an all new airplane. De Havilland was already working on a further stretch of the Dash 8 when Bombardier acquired the company. The aircraft is driven by two 3410kW (4573shp) takeoff rated Pratt & Whitney Canada PW150A turboprops driving six blade Dowty propellers. Max cruising speed is achieved at 95% power and max takeoff weight 648km/h (350kt). Max certificated ceiling 25,000 ft, or optionally 27,000ft. The maximum range with 70 passengers and reserves is 2,400 km.