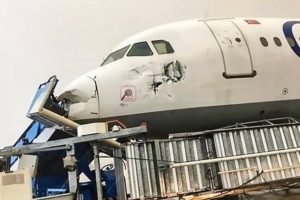 A powerful tornado hit Turkey’s Antalya Airport, causing damage to airplanes and the city’s international airport. Some busses were blown over, while an Airbus A321-231 belonging to Onur Air, and a Boeing 737-MAX8 belonging to Corendon Airline were both damaged.

Authorities said 12 people, who had been waiting to board a plane, had been injured in the tornado. Antalya Governor Munir Karaloglu told national media that none of the injured were in critical condition.

Footballers from Polish team Pogon Szczecin were left waiting for more than six hours to return to Poland after a winter camp in Belek because of the weather conditions. The team eventually boarded their Sun Express flight six hours late, landing safely in the German capital Berlin before taking a coach to Szczecin.

The video is showing the powerful tornado, hitting Antalya Airport:


Antalya Airport is an international airport located 13 km (8.1 mi) northeast of the city center of Antalya, Turkey. It is a major destination during the European summer leisure season due to its location at the country’s Mediterranean coast. It handled 18,741,659 passengers in 2016, making it the third-busiest airport in Turkey and the thirtieth-busiest in Europe.