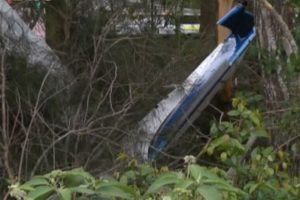 Private light aircraft Cessna 310R crash 20 m off the Pacific Highway near Taree in New South Wales, Australia. Following the accident the pilot and one passenger from the aircraft died. The two-engine Cessna 310 aircraft was reportedly travelling from Toowoomba in Queensland to Taree when it crashed into trees off the edge of the highway southbound, about 4 km north of Johns River. The police attended the crash site and located the bodies of a man and a woman.

“I saw a light aircraft banking sharply and completely turned on its side. It went completely over and went into a bush area about 15 metres from the highway”, said local resident Tony Hill, who was a witness of the accident. “I knew something catastrophic was happening because of the way it was banking. It basically banked on its side as it sort of swept over that tree line on the other side of the highway and then it sharply rolled onto it’s back and then came straight down”, added he.

Australian Transport Safety Bureau started investigation of the aircraft Cessna 310R crash. A team of three Transport Safety Investigators from Canberra arrived at the site to find the root cause of the accident. The investigators will examine the wreckage, gather any available recorded data and interview witnesses.