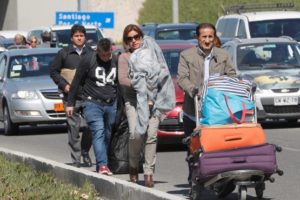 Chilean taxi drivers, protesting against applications for shared travel such as Uber and Cabify, blocked the airport of Santiago. The protest closed the road to the international airport. Santiago-based LATAM Airlines, which is the largest carrier in the region, and the low-cost carrier Sky, encountered serious delays in flights schedule.

It is reported that the taxi drivers blocked the road to the airport, which caused many kilometers of traffic jams. The airport press service claims about the detention of more than a dozen flights and the delay of 2,400 passengers, who were forced to reach the terminal by foot.

At the moment, the police officers are trying to disperse the protesters, to evacuate the road used by evacuators, but so far unsuccessfully, as the taxi drivers and their vehicles are too much.

A 65-year-old Brazilian tourists, trapped in traffic, died of cardiovascular disease, the Chilean police announced without revealing any more details. A medical helicopter has evacuated the man, but it was too late.

“This takeover of the airport by taxi drivers seriously damaged Chile’s image, the image of airlines and harmed people traveling or arriving in the country”, said the Mayor of Santiago, Claudio Orrego.

The American company Uber is known for its “aggressive” marketing in foreign markets. The applications for shared travel actively damps and “lures” drivers of taxi companies. Moreover, the Chilean Congress is progressing slowly in terms of creating regulations for Uber and Cabify, which remain legal in the gray area. Although some representatives of the government have pledged to penalize users who often use the applications, they have also expressed a desire to officially introduce services into the existing regulatory framework in Chile.