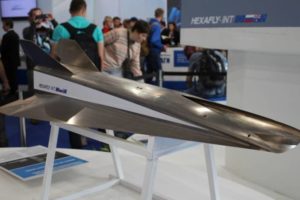 The French Aerospace Research Center works concept of the hypersonic passenger plane HEXAFLY-INT and already started the early laboratory testing of some of its systems and components. The flight tests of the prototype hypersonic aircraft are scheduled to begin in 2020. Consideration of the concept, which is carried out in conjunction with the Russian and Australian participants of the project, began in late October and should be completed before the end of this year.

The model of a hypersonic passenger aircraft is designed to conduct research in a wind tunnel. First of all, it should help in determining the optimal ratio between the internal effective volume of the aircraft and the air intake section of a hypersonic ramjet engine. The device is performed according to the scheme of the bearing body, in which in flight a significant part of the lifting force is formed on a wide fuselage. The model is also equipped with a short wing of a large sweep.

The project will create a technology sample with a length of about 3.00 m. The technology demonstrator tests will be conducted in Brazil at the Alcantara cosmodrome. According to current plans, the demonstrator of HEXAFLY-INT technologies will have to show the possibility of a stable and controlled flight at a speed of at least seven Mach numbers (about 8,600 km/h). At the same time, the project envisages the creation of an aircraft with a cruising speed of eight Mach numbers. The HEXAFLY-INT project is designed until April 2019.

Other details about the project are not specified.

The first tests showed that the demonstrator of the technology of the new power plant is able to function reliably at an air flow rate of 7.4 Mach numbers. Checks are carried out in a special wind tunnel. From 2019, it is planned to begin flight tests of the power plant. The hydrogen hypersonic engine externally is a wedge-shaped rectangular section with a narrowing in the central part, where a slight deceleration of the air flow occurs, mixing with fuel and ignition.

The power plant operates on the principle of creating a pressure difference at the inlet and outlet. The designers calculated that theoretically the hydrogen engine is capable of speeds up to 12 Mach numbers. The minimum flight speed at which the engine starts to work stably is 2.2-2.5 Mach numbers. The engine can operate at a flight altitude of up to 35,000 m. In the power plant, hydrogen is supplied through two belts, one of which is located at the entrance to the combustion chamber closer to the air intake, and the second in the middle of the elliptical combustion chamber.