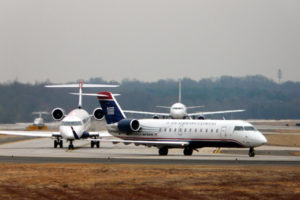 Airplane Bombardier CRJ-700 of PSA Airlines Canadair suffered cracked windshield during a flight between US ports Charlotte and Newport with 77 passengers on board. The accident occurred in approaching the Newport airport at 2000 feet height, but crew decided to divert to Norfolk, which was on 20 miles distance. The aircraft landed safely about 10 minutes later on Norfolk airport without reporting any injuries among the crew and passengers.

“The aircraft was entering holding just north of PHF due to a cell over the airport when the windshield shattered. Crew elected to divert to ORF as the weather was better there”, commented the witness of the accident.

The local authorities initiated investigation for the accident. The airplane will be repaired and inspected before return in service again.

Bombardier CRJ-700 (registration N710PS) is regional airliner, featuring with new wings with leading edge slats and a stretched and slightly widened fuselage, with a lowered floor. The airplane has length of 32.30 m, wingspan of 23.20 m and wing area of 70.60 sq m.