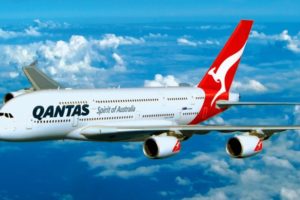 Boeing 787-9 of the Australian airline Qantas landed today at London’s Heathrow Airport after having made a first-ever passenger flight without a stopover from Australia to Britain. The machine took off from the Australian city of Perth on Saturday and arrived in London early on Sunday morning, spending more than 17 hours in the air. The length of the flight was 14,498 km. More than 200 passengers and a 16-member crew participated in the historic flight.

Perth is located in Western Australia, on the Indian Ocean, and it is far more convenient to fly to Europe than the three largest Australian cities – Sydney, Melbourne and Brisbane, which are located on the east coast where they live almost half the population.

Nevertheless, Qantas Executive Director, Alan Joyce, said that dreams of direct flights from Sydney and Melbourne to London could soon become a reality thanks to the new generation Airbus A-350-900 Ultra Long Range and Boeing 777-8.