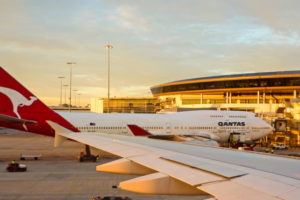 The dream of an uninterrupted flight from Sydney to London, halfway across the planet, will soon become a reality after the largest aircraft manufacturers managed to convince Qantas Airways that the 20-hour route could be reached.

An year after Alan Joyce’s chief executive officer publicly challenged Boeing and Airbus to create an airplane that can fly directly from Sydney to London or New York, he now believes the manufacturers have succeeded.

“We now think we have the machines for the purpose”, said Alan Joyce in an interview.

The “Sunrise” project, as Qantas calls it, includes the creation of an airplane capable of gathering about 300 passengers and their luggage over a longer distance than has been possible so far – with enough fuel for counter-wind or emergency situations.

If the first flights to be made in 2022 prove to be economically profitable for the company, the direct flights from major cities in America, Europe, Africa and Australia can become a reality. Qantas and manufacturers now care about the interior that will allow this marathon to become bearable to passengers. It is possible to have beds, places to offer childcare, and even a fitness room where you can workout.

“We are trying to think different”, said Alan Joyce, pointing out that there may be a bar, cabins and more.

Qantas has not yet decided whether to order Airbus A350 or Boeing 777X. The company plans to make an order next year, and says so far that none of the manufacturers have come forward. Competition between the two giants can help Qantas get the design and the price it wants.

In April, Airbus showed in Hamburg how the sleep modules might look like in the aircraft’s compartment. They will be available for the A3320 from 2020 and most likely for the A350.

Alan Joyce’s ambitious plan follows a three-year full roll-over of the company. It aims to create an unprecedented network of super-long routes at a time when the industry is already experiencing a peak and is heading down.

The profit, the margins and the return on invested capital of airlines worldwide will fall this year to the lowest level since 2014 due to higher fuel prices. Only Qantas says it will spend 20% more on fuel this year.