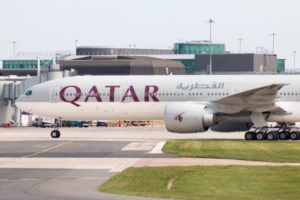 Qatar Airways flight from Doha to Bali landed by emergency on Chennai Airport in India, following misbehavior of Iranian woman, who found that her husband is cheating on her. The woman had unlocked her husband’s phone by putting his finger on its scanner, after which she realized that he was cheating on her. Later she started misbehaving with the crew members who tried to calm her down, but the situation began to get out of control.

The pilot decided to make an emergency landing to get the couple off the plane, due to safety reasons and danger for the flight. The aircraft landed safely in Chennai, where the the woman, her husband and their child were disembarked at the airport, while the Qatar Airways plane resumed flight to Bali.

The family spent the day at Chennai airport and was sent to Kuala Lumpur by a Batik Air flight. No police action was taken.

Qatar Airways did not put out any official statement about this, citing that they do not comment on individual cases owing to passenger privacy.