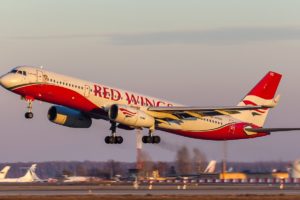 Red Wings Airlines transported a millionth passenger in 2017. The jubilee passenger arrived at the Domodedovo airport by flight WZ 196 from Astrakhan with Aibus A321. Evgeny Klyucharev, the general director of the airline, met journalists at the terminal in Moscow. The millionth passenger was Pavel Nikonov. The young man received memorable gifts from Red Wings Airlines, among them a certificate giving the right to a free flight by a regular Red Wings flights for one year.

“Today we transported the millionth passenger of the Red Wings Airlines in 2017. This is a significant event for us: the second time in our history we achieved such volume of air transportation and for the first time in 18 years of operation this happened in late August, almost the middle of the year. Times increased compared to last year: the fleet has increased, the number of routes has increased, the aircraft load has increased. The rapid growth of the airline is a responsible and complex process, but we are committed to our priority in work”, said the general manager of Red Wings Airlines, Evgeny Klyucharev.

For the first time in the history of the airline, the millionth passenger was transported already in August. In total, according to Evgeny Klyucharev, by the end of the year the airline expects passenger traffic at the level of 1.7-1.8 million people, which is almost 2 times more than the results of 2016.

Red Wings Airlines is an airline based in Vnukovo Airport, Western Administrative Okrug, Moscow, Russia. The airline provides both scheduled passenger and cargo charter services. The airline ceased operation in February 2013, when its license was revoked because of safety and maintenance issues. The license was reinstated in June 2013.