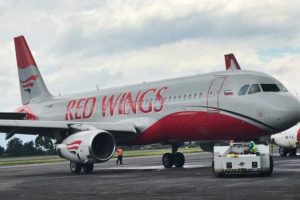 JSC Red Wings ordered 16 aircraft Irkut MC-21-300, concluding a solid operating lease for 16 years with Ilyushin Finance Co. The delivery of aircraft are scheduled for 2019-2022. The airplanes Irkut MC-21-300 must be equipped with a passenger salon in a single-class layout for 211 seats. Four of the aircraft will have Russian production engines PD-14, while the remaining units will be equipped with Canadian engines Pratt & Whitney PW1400G.

The signed agreement is the development of a preliminary agreement concluded in 2013 for delivery of 10 aircraft Irkut MC-21-300.

Irkut MC-21 is a Russian single-aisle twinjet airliner, developed by the Yakovlev Design Bureau and produced by Irkut, both United Aircraft Corporation subsidiaries. The initial design started in 2006 and detailed design was ongoing in 2011. It has a carbon fiber reinforced polymer wing and is powered by Pratt & Whitney PW1000G or Aviadvigatel PD-14 turbofans. With a capacity of 132-163 passengers in two class or 165-211 in single call, the aircraft has range of operations up to 6,000–6,400 km.