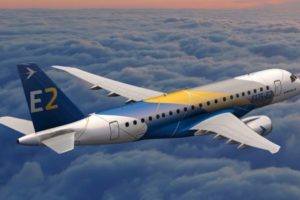 Regional aircraft Embraer E175 second generation and Mitsubishi MRJ90 do not comply with US requirements and possibly will not receive certification for operations in USA.

Embraer and Mitsubishi recognize that the Embraer E175-E2 and Mitsubishi MRJ90, respectively, will not be able to operate in the US market when commercialized, since both aircraft will be too heavy, exceeding the limits of the US regulators. However, both manufacturers expressed the hope that after commencing for commercial operations, the restrictions on the maximum take-off mass for regional aircraft in the United States will be changed.

These restrictions do not allow American Airlines, Delta Air Lines and United Airlines to operate regional aircraft with a maximum take-off weight of more than 86,000 pounds (39 tons). The maximum take-off mass of Embraer E175-E2 is 44.33 tons, and those of Mitsubishi MRJ90 varies from 39.60 tons to 42.80 tons, depending on the modification.

In fact, because of this, Embraer delays the commissioning of the E175-E2 until 2021 to allow airlines more time to negotiate changes in the terms of the restriction. As for the MRJ90, at present it is planned to be put into operation in mid-2020 so far only in Japan.