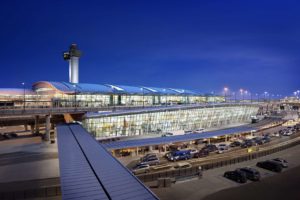 The US invests 13 billion USD in renovation of the John F. Kennedy International Airport in New York. This was stated by the governor of Andrew Cuomo, who supports the idea that the outdated airport should become a “world class travel hub”. Airport renovation plans were presented today at a meeting in Manhattan of the Association for a Better New York.

The airport will have two new international terminals, centralized ground transport and better roads. These renderings also show off some curious additions to the airport that are worth noting here: a section labeled Central Park at JFK; miniature versions of the High Line, and what appears to be Chelsea Market; a facsimile of Flushing Meadows’s Unisphere; and sculptures that are probably intended to denote the Big Apple. It’s not yet clear if any of these features will actually make it to the airport in the end, but in any case these miniature recreations seem more Las Vegas than New York City.